Starting October 1, 2016, we will hold our 1. Boot Loot Competition giving out a 1 Liter Glass Boot to the tournament winner. The tournament is open and FREE to enter for everyone.

The competition is played as single elimination tournament. Players are seeded based on their rating. Matches are played with a maximum of 32 players per game. The top player of each game advances to the next round. The prize is given out to the winner of the final round. The glass boot will have a custom engraving reflecting the tournament victory. A shipping address will have to be provided by the winner of the competition. We will do international shipping.

The tournament prize is sponsored by Petrikov Alexander (Petraa76). We thank him for his generous donation! 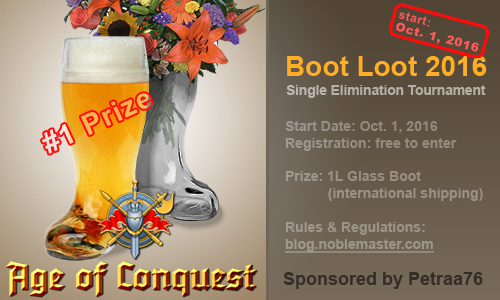 Please contact us if you are interested in sponsoring a tournament in the future. You will cover the prize plus shipping costs (international shipping). In return we can promote your company and/or website via Twitter, Facebook, blog and forums. We are open for negotiation. As a general reference, the prize as shown above is in the range of USD 100.- (prize + international shipping worst-case).

Update for January 19, 2017: nudlesoup has won the tournament and sent us a picture of the prize.